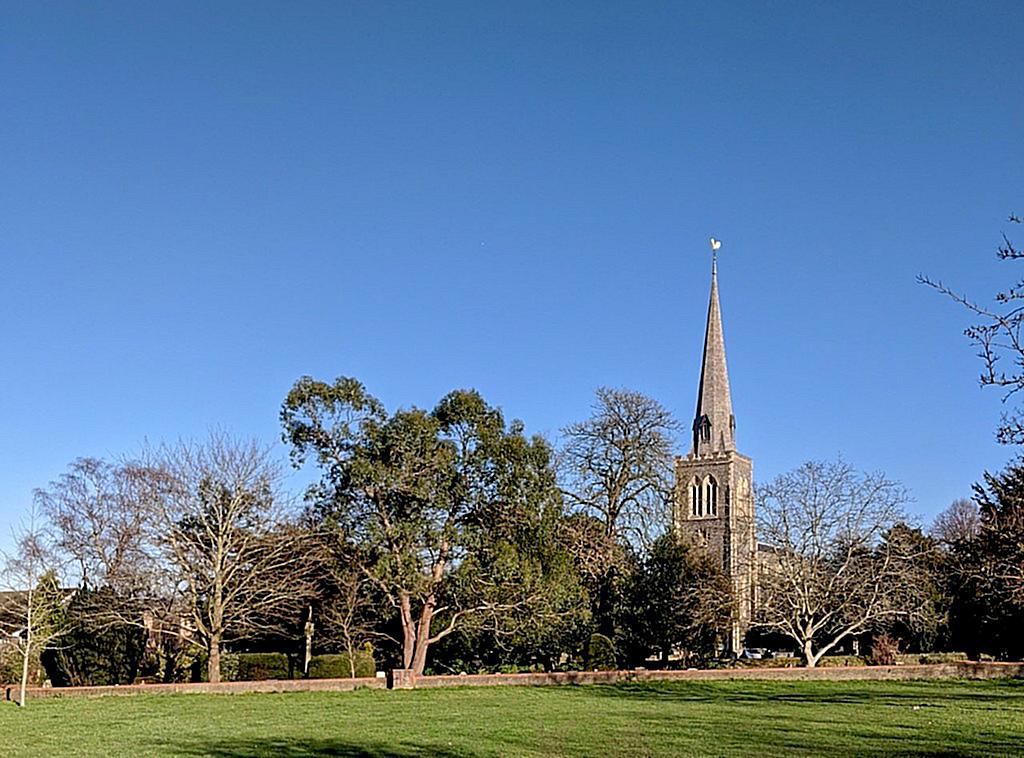 Wimbledon’s rich history along with many of its stunning landscapes are no longer visible. Local Author and Historian Trevor P Kwain brings the forgotten palaces and manors alive as he recalls those that lived here and helped build the foundations of the area we know and love today.

During the recent lockdown, I longed for long walks enjoying Wimbledon Hill, from north to south, east to west, the very walks that inspired the characters of the Wynnman; fictional ambassadors sharing their history. They lived all over, however, some were lucky enough to live in Wimbledon’s palaces and manors surrounding the Hill area.

Until 1588, Wimbledon was a farmers’ village, of little importance. The Cecil family changed that when they built the first ‘palace’ where the northern end of the golf course intersects with Arthur and Home Roads. From the few drawings we have, we can see that it was majestic in its proportions and had gardens reaching as far back as Ricards Lodge High School and beyond. Sadly, not even a hint of it or its private deer park exists today, but we do not what happened to it.

Built in the ‘H style’ favoured by grand Elizabethan homes like Hampton Court, it was abandoned during the Civil War and fell into disrepair. Thankfully, a young Huguenot, Theodore Janssen purchased the title of Lord of the Manor of Wimbledon during the eighteenth century, and, using the bricks of the original palace, built his very own grand home christening it Belvedere House. 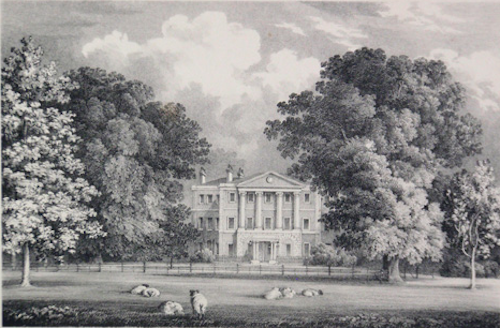 Janssen chose a new location which was at the entrance of what in modern times is Alan Road. You will have no doubt seen the Belvedere name around on your travels in Sw19 and now you know why! The Belvedere Estate was huge, sprawling from Church Road down to Woodside and the High Street to St. Mary’s Road. The house itself was a stunning example of Georgian architecture inspired by modern neo-classical themes and came at a time when Wimbledon was gaining attention from another brilliant example of Georgian architecture inspired by modern neoclassical themes. This was at a time when Wimbledon was beginning to gain attention from noblemen and politicians seeking an idyllic residence with far reaching views of Epsom Downs far from Central London.

The Belvedere Estate was broken up and sold off to property developers when Jansson, accused of fraud, developed significant financial troubles through the large fines he accumulated. Luckily, he was able to buy the house itself back and it was standing until 1900 when it was demolished as part of Wimbledon’s urbanisation project.

At the same time, Janssen was being charged for his misdemeanours. The title of Lord of the Manor of Wimbledon was purchased by Sarah Churchill, Duchess of Marlborough. Sarah was a close friend and confidante of Queen Anne having significant influence at the highest level of government. She immediately began the construction of her new residence in Wimbledon behind the remains of the Cecil’s’ home, west of today’s Ricards Lodge High School for Girls. 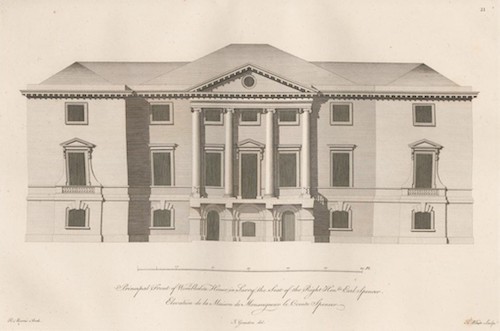 Recycling was a priority even in the 18th century and the Duchess used the left over Elizabethan bricks to build what would be known as Marlborough House. Maps of the period show the grand house facing north towards Southfields. Unsurprisingly, Sarah created a building ahead of its time with stunning porticoes, columns and a sunken ground floor. A system of tunnels was created linking to nearby servants homes allowing them to easily bring food and supplies without the vulgarity of being seen! The Duchess’ front garden is now Wimbledon Park. Capability Brown was personally hired to redesign it taking inspiration from both French and English landscapists of the day. Today we can still see his work in the park. The lake was part of his design and water was fed into it via a now disused tunnel from the hill. When taking a stroll through the park you will come across oak trees that Brown himself had planted. Regarding its front garden, known today as Wimbledon Park.

Marlborough House no longer exists as it became the victim of a ferocious fire in 1785.  The heir to the house at the time, the 1st Earl of Spencer (an ancestor of Diana, Princess of Wales), cleared the ruins and turfed the ground. For the next seventeen years the site remained empty until George, Earl Spencer II, constructed a new palace. Named Wimbledon Park House and  built in the elegant Regency style, it remained the Spencer’s until the mid 1800s. 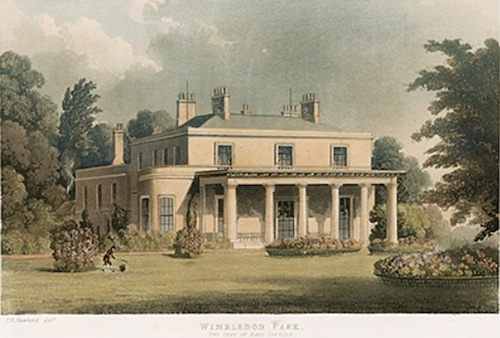 Wimbledon was changing rapidly with the planning of railways and a move in society toward the modern bourgeoisie. The family influence was in decline and their powers over areas such as the Common were diminishing. In 1846 they decided to sell all their lands to John August Beaumont, a real estate developer, who started to build new streets and many of the houses you see today to meet the new rise in demand. Wimbledon Park House, the last palace, was leased out but became an isolated, majestic relic of its time, surrounded by modern mansions and detached houses. By 1949 it was severely dilapidated building and it became a victim of the  post WW2 economy.  Surrey County Council quite simply could not access funds  for the  repairs.

However, the last majestic palace of Wimbledon resurfaced in 1972 when a new school was being built. Old walls and tunnels were found underground, a hint at a long history now buried forever.

One can only wonder, just as my character Enrico LoTrova does, what might still lie underneath the quiet houses of Wimbledon. 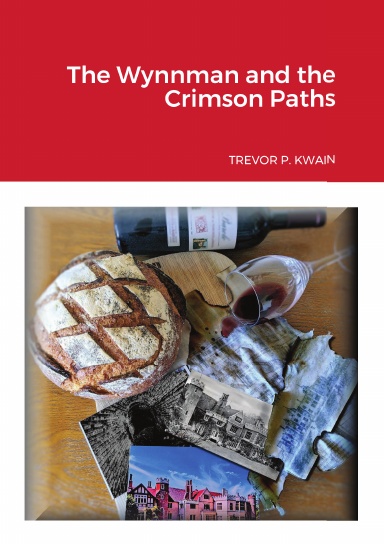 The Wynnman and the Crimson Paths By Trevor P. Kwain

Based in our beautiful Wimbledon Village, the story follows up on Enrico’s life in the village, living his dream with his successful bakery. Yet, the peace of the village is about to be crushed by a ghastly discovery near Saint Mary’s Church. Finding his curiosity sparked by ancient manors and secret potions, his curiosity will lead him to Lord Awlthorp, the mysterious man in black at the end of the first novel, eager to discover one of the hill’s long-forgotten secrets.

Trevor has woven a fascinating novel where present day Wimbledon and its history meet in a cosy corner of the village and the history of the Wimbledon Manors.

The Wynnman and the Crimson Paths by Trevor P. Kwain is now available to purchase in paperback and eBook from Lulu here >.